I have just had the wonderful experience of reading the novel Forever, by Pete Hamill. It is the first novel I have read by this author, although I hope it will not be the last. 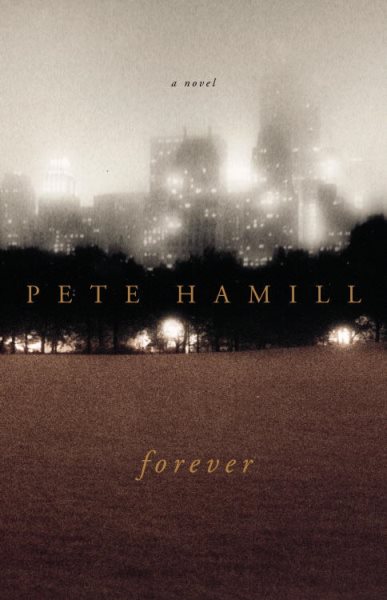 It is a sprawling, all-challenging novel, with a time span of nearly three hundred years, and a cast of characters both fictitious and historical. It is a story about New York City (specifically, Manhattan), seen through the eyes of an immigrant who comes to the city for a single cause but remains to explore the city's every aspect, inch, crevice, and mutation. It is a story that shows how a city is both a living creature and a constantly-growing graveyard, a place where ideas are born and die, a constant conflict between love and destruction.

The novel begins in early 1700s Ireland, where a young man named Cormac Samuel O'Connor watches his father die at the hands of an Earl. Cormac is told that he must avenge his father, and he follow the Earl to New York City, where the Earl handles the business of a slave-trading company. On his voyage there and in the city, Cormac meets a variety of people from different cultures, each beautifully sketched by the elaborate conversations and confrontations that Hamill depicts.

Cormac eventually finds the Earl and kills him, but instead of leaving the city for Ireland, Cormac stays and defends the freedom that his companions are fighting for. Armed with his father's sword, Cormac fights oppression wherever he sees it - only to be shot, and mortally wounded, in 1741.

The novel could have ended right there, but it does not, because Hamill wanted to do something that I have never seen an author do before: give one person the opportunity to see a city grow and develop over a period of several centuries. Cormac is brought to a cave and revived by a "Babalawo," an African priest, who tells Cormac that he has been given the gift of eternal life. It comes at a price, however: Cormac's life is now inextricably bound with the life of Manhattan. He cannot leave the island, and he must constantly immerse himself in the different cultures in order to stay young and alert. Cormac accepts this gift, and the Babalawo is not seen again for sever hundred years.

Cormac meets George Washington, becomes involved in the Underground Railroad, watches the city grow and stumble and burn and grow again. Throughout the novel he works as a reporter, observing murder scenes, coldly noting the corruption of politics and prostitution, pointing out details in paintings that he himself had painted a century earlier. It is a story that we all want to experience, the ability to know the entire of a city because we have been there the whole time - a feeling of true connection with the environment around us, even if it is only a small fraction of the whole world.

I am not fit to judge the historical accuracy of this work, but the detail of the novel is extraordinary. Everyone has their own desires and ingenuities and shortcomings. What ails Cormac is that every person he meets eventually dies, and their ideas are either forgotten, or perverted to some new agenda. As the novel progresses he grow weary, sluggish, and cynical.

Cormac's weakness becomes the novel's weakness, in my opinion. That is, no person could ever take this much in, all of this death and cruelty and frivolity and apathy and ignorance. In spite of the Babalawo's gift, Cormac is only human, and he cannot study the city objectively or dispassionately. He falls in love (several times, with some rather anatomical descriptions), but he cannot leave Manhattan, and so each partner eventually leaves for some other part of the country or the world. He saves people's lives, and people aid him, and every friend he makes is eventually torn from him by the forces of time. By the time is two hundred years old, I could sense that he has had too much of life. Eternal life does not make one a god.

Hamill has taken a mortal and given him an experience that no mortal could entirely appreciate. The last quarter of the novel sags, as Cormac attempts to find a way to leave this world for the "Otherworld" that his Irish family once spoke of. Whether he reaches it or not is of no consequence. What matters is this: history has no beginning, no end, and no obligation to fulfill the expectations of reason. Cormac sees the patterns of creation and decay, arrogance and gratitude, but patterns that do not transcend themselves or bring their subjects to a higher level of understanding. What makes history fascinating is how much detail it can encompass without destroying its own drive for constant motion, as if Hamill added the element of immortality precisely because it belittles the historian: no one could make sense all of these occurrences. When Cormac realizes this, he loses his nerve to continue documenting everything in Manhattan, and the city moves on without him.

Nevertheless, Hamill has executed this ambitious novel with much success, and I do not think there will ever be another like it.
Posted by Anonymous at 3:13 PM No comments:


Ellen Heath, local quilter and Library trustee, is organizing a Beginners Quilting Circle  at the Library. During a program titled Do You Think You'd Like to Make a Quilt? on Thursday, March 26, at 7 p.m., Ms. Heath will use slides, a trunk show, and a sewing demonstration to explain exactly what a quilt is, show some of the techniques used in quiltmaking, and provide a view of the many types of quilts.

The Friends of the Library are sponsoring this program as the opening event for the Beginning Quilters Circle. The program is for anyone who has ever dreamed about making a quilt or wondered what is involved in creating one. No experience is required.

The Friends are also providing funding for the purchase of sewing machines, tools, and supplies so that interested members of the community who may not have the necessary equipment can meet at the Library to learn how to make quilts.

The Circle will begin meeting in April on every second and fourth Monday of each month. Participants may bring their own sewing machines and supplies or use those made available through the Friends’ funding.  The Courthouse Quilters Guild of Frenchtown, NJ, has donated fabric.

Two local businesses are cooperating with the Library in this project.  At Piece Quiltery in Palmer has offered a discount to members of the Circle as well as a special field trip to the shop.  The Singer Sewing Center in downtown Easton is providing a discount on sewing machines purchased for the project.

While there will be no formal classes, Ms. Heath and volunteer Claire Coakley will provide individual lessons and support so that participants can work on projects of their choice.  All are welcome, from those who have never used a needle or sewing machine to experienced clothing makers who want to branch into quilt-making.

Sign-ups for the Circle will begin at the March program, but new members will be welcome at any time.

No registration is required for the March 26 event. Meetings will be held in the Catherine Drake Room, which is handicapped accessible from Church Street. For more information, contact Ms. Heath at ellheath@gmail.com or call the Library at 610-258-2917 ext. 307.

Well, someone had to do it.

Posted by Anonymous at 6:13 PM No comments: