The display for this month was "306 - Books on Love." I think this was an excellent idea and should be done every month.

"306" is formed of the class number "300" (social sciences) with the ending "-6" (societies). Thus, the number can mean any of the various specialized groups that exist within human society. The number is often labeled in DDC guides, as meaning "culture and institutions," or "societies in a sociological sense." Hence the number encompasses political institutions, economic institutions, sexual groups, members of a family, religious groups, and others.

The Easton Area Public Library currently has 375 books classified under 306.8 (marriage and family), which is more than the other eight subsections of 306 put together.

Most of the books used in the display were either 306.874 (parent-child relationships) or 306.7 (human sexuality).

For books about love as an emotion, see 152.41. Our library only have five books under that number, so obviously that would not make a very good display on its own. For an account of how love differs from infatuation, see Infatuation vs. Love.
Posted by Anonymous at 11:43 AM No comments:

The Academy Awards were last night. Here's a breakdown of the winners.

"The Theory of Everything" won best actor. For books about theoretical physics, see 530.1.

"American Sniper" won best sound editing. For books about the Iraq War (and all those various wars we keep having in that region, for some reason or other), see 956.7.

"Interstellar" won best visual effects. For books about traveling to other planets, see 629.455.

Gail recently showed me a database on our website. Did you know that you can read and print transcripts from 147 different news and new-related radio and TV shows?

Click on the "Databases" link on our website, and select "America's Newspapers." Then scroll down the page. Under the "shortcuts" banner on the left, you should see a link that says "Access Broadcast Transcripts":

After you click on the link, you should see the following page:

Posted by Anonymous at 2:41 PM No comments:

A few days ago, when I was answering questions on AskHerePA, I received a question that started off like this:

After that, the patron elaborated on his/her question with the following statements:


I told some of my friends on Facebook about this fascinating transaction, and one of my friends said that I should have recommended Mavis Beacon. I looked up Mavis Beacon, and found that she is a fictitious character in a computer program intended to help people learn to type.

Philadelphia's Mutter Museum is the finest museum of medical history in the United States. Housed in a Beaux Arts style building in Rittenhouse Square, this cabinet-style museum contains thousands of skeletons and skulls, specimens in jars, models, medical instruments. and oddities like the Soap Lady and a nine foot long colon. When I visited some years ago, I found the experience fascinating and overwhelming - so many disturbing deformities and illnesses - and I also wondered who would collect all that weird stuff. I'm glad I read Cristin O'Keefe Aptowicz' engaging and very readable book Dr. Mutter's Marvels and learned how Dr. Thomas Dent Mutter revolutionized the practice of surgery and how the collection came to be. 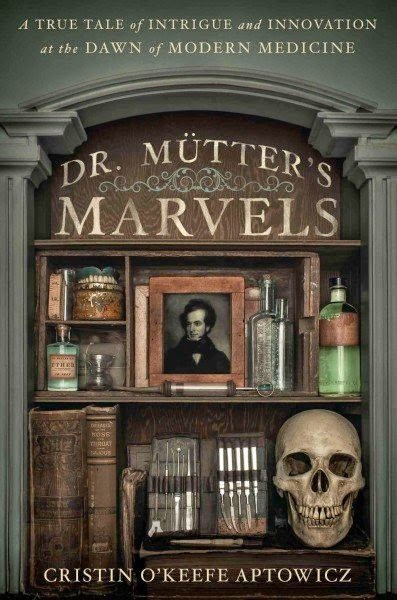 In 1765 the University of Pennsylvania School of Medicine became the first and only medical school in the thirteen colonies. Mutter was one of its graduates. By the 1820's, cramped classrooms, burgeoning student rolls, and an "air of infallibility" at U of P made it clear that Philadelphia needed another medical school. Jefferson Medical College became the second such institution in 1824.

When Mutter began his surgical career at Jefferson in the mid-1830's, surgery was done without anesthesia. The hapless patient would be held down by several assistants and offered wine to dull the pain. All the surgeon could do was perform the operation as quickly as possible. In fact, speed was a point of pride. You'll read about some unfortunate leg amputations done under three minutes in chapter 15.

Mutter emphasized a more compassionate approach to surgery than some of his colleagues did. He prepared patients by explaining the procedure ahead of time and showing them the instruments that would be used. He tried to "desensitize" the problem area by manipulating it during the days before the procedure. For example, he would massage the palate before attempting to repair a cleft palate. He also watched for reactions and communicated with the patient during the operation. You can read the gripping account of  Mutter's operation on Nathaniel Dickey in chapter 5.

Dickey was one of the "monsters" - for that's how they were classified - who sought out Mutter. People with horrific deformities learned about this compassionate doctor who had studied the techniques of "les operations plastiques" in Paris. They were willing to undergo arduous and painful reparative surgeries if they would give them the chance at a more normal life.

Many of the "monsters" were women. Some suffered from "phossy jaw" - a condition common to those who worked in match factories. Phosphorus was the active ingredient in matches at the time. "Match girls" often licked their "chemical-coated fingers" to help in picking up the wood slivers. Toothaches and swollen gums could lead to abscesses so deep that the jaw bone would be exposed and even glow in the dark.

Most common were disfiguring burns suffered while cooking. As was the fashion, women dressed in many layers of clothing, covered to the neck where there were often lacy, decorative fabrics. All it would take was a stray ember, a splash of grease, or a child's sudden hug while she was working at the fireplace and her clothing could erupt in flame. Since the woman would be bending over the fire, flames would move up her chest to her neck and face. As scar tissue formed, the jaw might be pulled down, teeth exposed, and the neck immobilized.

Chapters 12, 13, and 14 deal with women's health issues and one burn case in particular. A 28-year-old woman, who was burned when she was five, went to Mutter. Her eyelids were pulled down by scar tissue, making it difficult for her to blink. She couldn't close her mouth for more than a few seconds, and she was unable to turn her head because scar tissue had pulled her chin down to her sternum. You'll read how Mutter used an innovative technique - the "Mutter flap" - still in use today in restorative surgery.

The author also provides insight into the intense rivalries among the Philadelphia doctors. Making change was difficult. One example is the use of ether as an anesthetic. The "pain-erasing" effects of ether were known for almost 50 years before its use in surgery was really established. Mutter was the first surgeon in Philadelphia to administer ether anesthesia and was excited about its potential. However, opposition to its use was "immediate and widespread." The board of the hospital affiliated with Jefferson Medical College banned all use of surgical anesthesia for seven years. Making progress even more difficult for Mutter was one of ether's biggest critics, his colleague Charles D. Meigs, an obstetrician who was fond of quoting Genesis: "In sorrow thou shalt bring forth children." When his patients in labor would beg for relief, he always refused; women were meant to suffer. Chapter 18 recounts the anesthesia controversy . You'll read a great anecdote about Meigs' practice of demonstrating the dangers of ether by "etherizing sheep to death in the classroom."

Another point of contention was infectious disease. Philadelphia suffered such severe outbreaks of cholera, yellow fever, typhus, tuberculosis, and malaria in the 1840's-1850's that even civic leaders were beginning to intuit a connection between sanitation and disease. Among the doctors at Jefferson, Mutter was known to be very clean and to use "as near an aseptic technique as was possible at the time."

Meigs, however, was a stubborn holdout about sepsis. As an obstetrician, he was a "non-believer in the infectious nature of puerperal fever," commonly called childbed fever. He would examine many women in a day with perhaps only a simple water rinse of instruments and hands. "Aggressive" washing, according to Meigs,  implied that "doctors were not gentlemen" because "all gentlemen were clean men."

If you're a fan of Erik Larson ( The Devil in the White City) and if you enjoy history, especially when it's local, I think you'll like this fast-moving narrative history. Besides medical history, you'll read about Philadelphia in the early 1800's - ". . . an easy place to die" as explained in Chapter 2.

You won't find very much about Mutter's marriage and personal life. His childhood and early adult years are covered, but Aptowicz had no personal diaries or correspondence from Mutter or his wife to use as sources about his later life. She conducted most of the research for the book at Philadelphia's medical libraries and in secondary sources. Descriptions of surgical procedures come from Mutter's published work and quotes are excerpted from his speeches.

She tends to use long quoted sections in the first half of the book; I skimmed or skipped them and don't think I lost anything. And if you're expecting a book about the Mutter Museum because of the title, you'll be disappointed. There's just a short chapter at the end of the book. A visit to the Museum would be so much better anyway.


Dr. Mutter's Marvels was the Non-Fiction Book Group's January selection. February's book is Slaves in the Family by Edward Ball. The group will meet at 7:00 pm on Wednesday, February 25. New members are welcome.

Everyone is "weird" in their own way

I just found out that the word "weird" comes from the Old English word wyrd, which is also the origin of the word "worth." The word "weird," therefore, does not literally mean one who is unnecessarily different, or possessed; it really just means one who is in touch with Fate, as opposed to being in touch with the world as it appears to most. In Macbeth, the witches are called the "Weird Sisters," because they understand Macbeth's fate far better than he himself understands it.

For books about moral philosophy for individuals, see 170.92.
Posted by Anonymous at 9:21 AM No comments: